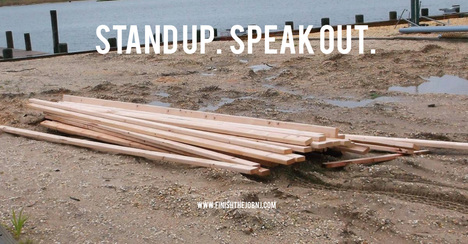 The sights and sounds of hurricane preparation and hurricane repair are pretty much the same. Plywood hammered tight. Sand bulldozed high. Everything not nailed down is elevated.

The Jersey coast was at work again Thursday, just as it’s been for the three years since Hurricane Sandy.

But now, that work of recovery is melding into the busyness of battening down the hatches for Joaquin.

“It’s hard to tell which is which,” said Joe Ready, of Union Beach, as he moved a bunch of things out of his ground-level shed and into the elevated, unfinished shell of his home 200 yards from the Raritan Bay.

“The way this wind is blowing, we’ll get two feet here easy,” he said.

What have we learned? Are we more prepared?” — Amanda Devecka-Rinear, New Jersey Organizing Project
Along the Raritan, Delaware and Barnegat bays and the entire 127 miles of New Jersey’s Atlantic Coast, it was Hurricane and Nor’easter 101 yesterday: Pull boats from  the water, strap down outdoor furniture, move indoor furnishings upstairs.

Except as the new unwanted guest is churning up the coast, the mess left by the old one still isn’t cleaned up. Not structurally, not emotionally.

“This is normal for us,” said Amanda Devecka-Rinear, who lives in a bungalow just a few feet from Barnegat Bay on Cedar Bonnet Island. It is a home that her family has owned since 1929. “We know how to prepare for a storm. But there is definitely a heightened anxiety here since Sandy. And that’s not so much because of the storm, but because of the recovery.”

Devecka-Rinear is executive director of the New Jersey Organizing Project and one of the people who followed Gov. Chris Christie to Iowa in March to protest for the thousands of families left homeless by Sandy.

NJOP has brought attention to the problems in state and federal recovery programs, ranging from now well-documented insurance fraud to contractor malfeasance to predatory bank foreclosures.

“There are so many people who say what happened after the storm was worse than the storm,” said Devecka-Rinear.

Ready is one of them. His house has been in limbo – a 20-foot high limbo – since last year, with no prospect of it ever being finished. He spent insurance money and his own savings to repair the house, and then entered the state’s Rehabilitation, Reconstruction, Elevation and Mitigation (RREM) grant program to have it raised. After the contractor went through the grant money, the company walked off the job and failed to secure his house. Vagrants vandalized it. And there it sits.

If the tidal surge from Joaquin washes ashore with any of the intensity of Sandy, Ready said, “I’m not sure what the house will do. Maybe it will just fall over. Maybe that would be best. Who the (expletive) knows? That would be fine with me.”

What you hear in those words is Sandy fatigue.

Gloria Culos shares the same sentiment. Her house in Brick Township’s Shore Acres was destroyed by Sandy, but because of recovery red tape, it has yet to be demolished.

Culos lives in Beachwood now, far enough from Barnegat Bay to feel safe. “This house is my security blanket,” she said. “If I were still on the water, I’d be very nervous.”

Marita Axten is back on the water, in her Mystic Island home, and said she is “terrified.”

“I’m scared and I’m worried sick,” said Axten, whose home was destroyed by Sandy and only moved back in June. “I don’t know if I can go through this again. No. I know. I can’t.”

Joe Mangino, of Beach Haven West, just got back in his house.

“We’re getting the final CO (certificate of occupancy) today,” said Mangino, who is a member of NJOP and was with Devecka-Rinear in Iowa to protest in front of Christie.

“I have a lot of people calling me in a panic,” he said. “I try to tell them to keep calm and prepare like they would for any other storm, but it’s a little unsettling. Three years after Sandy, we still don’t have the mechanisms to help people recover from a major storm.”

In Union Beach this morning, crews were piling up dirt in the marsh that separates Brook Avenue from the Raritan Bay. The street was the place hardest hit on the Bayshore by Sandy. Homes were flattened or just disappeared, leaving brick steps to nowhere and full roofs lying on the ground.

The prep work was a scene playing out all along theShore, as towns pushed their beaches up to their boardwalks or trucked in dirt to fortify the shoreline.

Ken Langdon, a year-round resident of Ortley Beach section of Toms River, was relieved to see the township’s public works crew pushing mounds of sand against the new boardwalk.

“Nothing’s happened with the dunes,” he said. “Then we heard they (the Army Corp of Engineers) were going to start, but nothing is happening.

“The town was out there last week, well ahead of this storm, building up the sand. It’s not like the dunes they have in Lavallette or Seaside Park, but it’s a start.”

Those dunes, built high over years and fortified with grasses and plants, kept the damage in those places at a minimum during Sandy.

Whatever happens with Joaquin – whether it is widespread wind and wave destruction, or just typical coastal flooding – the threat alone has raised some important questions.