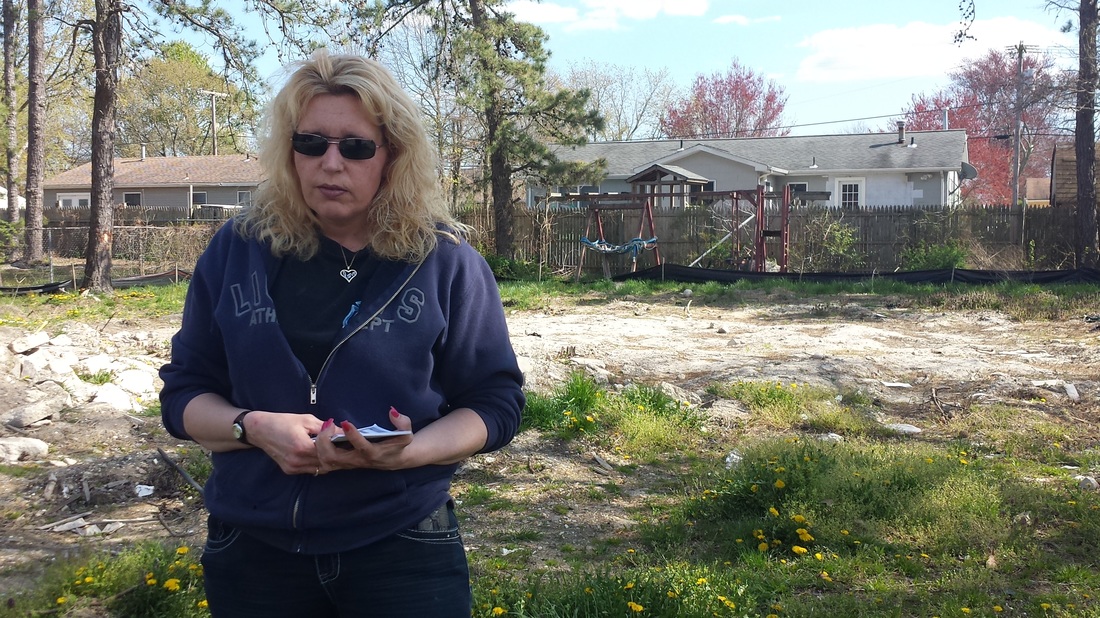 Weeds now envelop the pile of broken concrete slab where Nancy Wirtz’s home once stood. A swing set, bowed and rusted from neglect, is the only remnant of the place where she raised two children.

It was a simple house, like most in the Forked River Beach section of Lacey Township. Compact and rectangular, it was built on a spit of pinelands between Forked River, Oyster Creek and the Barnegat Bay in a neighborhood where streets are named for Florida towns and water fowl.

During Hurricane Sandy, two towering pines crashed down on the home’s roof and the bay swamped its floor. And that was just the beginning of Wirtz’s all-too-common Sandy story.

Her FEMA-backed flood insurance carrier paid just 10 percent of her $140,000 policy amount – after more than a year’s wait – even though the home had to be demolished. So she entered the state’s Reconstruction, Rehabilitation, Elevation and Mitigation Program (RREM) and got a $150,000 grant for a new, elevated house.

And that’s when she met her builder and her story became a typical saga in this third summer of Sandy; one of widespread contractor entanglements and complaints ranging from slow or sloppy work to outright thievery.

Wirtz said her contractor took half of her grant money to start work but then told Wirtz to certify the architectural designs as her own — which would have made her responsible for any flaws.

That’s when she fired him.

“He told me he had hired an architect,” she said. “The town building inspector told me (the contractor) got the plans off the internet said he’d done it before.”

Such stories abound. One contractor failed to winterize homes being elevated in Long Branch and Union Beach, leading to water-damage and mold infestation. Another had a house slide off elevation cribbing in Union Beach, destroying a structure that survived 90 mph winds and a historic tidal surge. In Toms River, another was charged with stealing at least $75,000 from a 92-year-old widow.

The total numbers of complaints about contractors are hard to lasso, just like the men who run from job to job, make excuses for delays, shift blame to subcontractors, and refuse to fix shoddy work or bring jobs up to code. Voicemail recordings that say “leave your number and I’ll call you back,” are the final lie in a litany of broken promises.

Some complaints go to town code officials, others rise to county consumer affairs divisions or prosecutors, still others go to various state agencies.

Some are resolved quickly, others lead to investigations that drag on, as authorities sort out “he said-they said” allegations and follow financial paper trails. So no one knows how many complaints there really are.

But in Sandy-strafed Ocean County alone, the Division of Consumer Affairs fielded 501 home repair complaints in 2014, and 449 last year – compared to 298 in 2012, the year the storm hit.

“There are many good, reputable contractors out there,” said Scaturro. “But, unfortunately, we also have unscrupulous, unconscionable scam artists who take advantage of people who are distressed and desperate.”

In many cases, homeowners don’t file complaints because they’re afraid contractors will freeze them out during litigation.

“If I go to consumer affairs or the police, my guy’s not coming back,” said Steve Burkhardt of Toms River. “He’ll disappear.”

The house was to include an elevator, so Linda’s elderly parents could move in. They have both since died, and the shaft remains empty and unfinished. Other problems include a broken tub, unanchored stairways, uneven door jams and window casings, and sloppy siding trim.

“Meanwhile, I keep paying subcontractors out of my pocket because they can’t find him,” Steve Burkhardt said. “Otherwise we’ll never get in.”

Two doors down from Burkhardt is the still-vacant house of Ida Terranova, the elderly widow police said was victimized by contractor Joe Reiss of Blue Diamond Construction of Monroe. Reiss’s attorney, Evan Nappen of Eatontown said Reiss was unfairly singled-out “as the manager” of the company and charged.

Pat Miller of Blue Diamond Contracting of Jackson – which has built a model hurricane-proof house in Keansburg — had strong words for the miscreants in her field.

“They make up names close to names of reputable companies, like ours,” said Miller. “It’s Crooksville out here. It’s disgusting.”

For the 10,800 homeowners in the state RREM program, there were some protections, whether people chose Pathway B (finding their own contractors) or Pathway C (having a state assign a contractor).

To get state work, Pathway C contractors had to meet certain requirements, which included submitting litigation and safety histories and proof of insurance, said Lisa Ryan, spokesperson for the state Department of Community Affairs, which administers the program.

The state also tried to protect Pathway B homeowners by making sure the contractors were registered and had not been debarred, Ryan said.

Neal Buccino of the state Division of Consumer Affairs said his agency fielded only one complaint about a Pathway C contractor.

But one Pathway C contractor failed to winterize the homes of Robin Buck of Long Branch and Grace Caputo of Union Beach. Ryan said the company has since left the program it will compensate those homeowners.

For Caputo, that compensation is in dispute. After the storm, she replaced damaged flooring, Sheetrock, appliances and furniture – not uncommon for people who were unsure if they had to elevate their house.

“Everything was new,” she said. “Now I have mold and I’m back living with my parents.”

The state has assigned her a new contractor, but work has not yet begun.