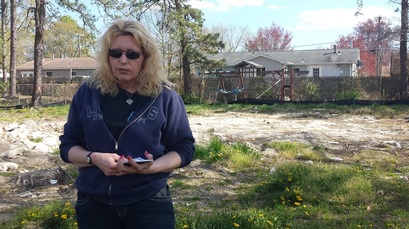 Debra and Steve Corrado’s home in the Silverton section of Toms River, is stranded high its foundation, unlivable.

They’re waiting for their third state-assigned contractor from the Reconstruction, Rehabilitation, Elevation and Mitigation program to finish it. Just four days ago – one month shy of the three-year anniversary of Hurricane Sandy destroying their home – they signed an amended RREM grant to get the job done.

They’re in their third rental.

It gets worse. They’re in foreclosure.

“After all the money we spent trying to get back in our house, now we have to hire a lawyer to try to keep it,” Debra Corrado said.

This is not a hand-out,” Assemblyman Gary Schaer.The abridged version of their story goes like this:

Their house was wrecked by the hurricane and they accepted what they say was low-ball settlement from their insurance company.

“We didn’t want to waste time fighting,” she said. “We wanted to get back home.”

They followed Gov. Chris Christie’s advice to “rebuild now,” and renovated by using their saving and emptying their 401Ks.

“Part of the house was on a slab, and they actually cut it in half with a saw,” Corrado said.

They couple got behind on the mortgage and the bank began foreclosing. The nightmare continues. Nearly three years and counting.

This is not an isolated case.

“One-third of the people impacted by the storm have not had their problems remediated,” said state Assemblyman Gary Schaer, a Democrat whose districtincludes Moonachie and Little Ferry, two towns hit hard by Sandy. “Not 5 percent … not 10 percent … 33 percent. It is unconscionable that three years after the storm, we still have thousands of people out of their homes.”

And many of those people, like the Corrados, now face foreclosure.

Schaer and fellow Democrat Sen. Jeff Van Drew, who represents Atlantic Cape and Cumberland Counties, have introduced bills in their respective houses to get the banks to back off.

Assembly bill A4139 and Senate bill S2577 have passed committee and Schaer said he hopes each will be voted on by the end of the year.

The identical bills ask that banks halt foreclosure on homes in the state RREM program and the LMI (low- and moderate-income) rebuilding program until 60 days after they are reoccupied.

The fact that the legislators come from opposite ends of state illustrates the swath of Sandy’s destruction and its continued misery.

“This storm did not discriminate geographically,” Schaer said.

“But many of the people – not all, but many – who remain out of their homes were the most economically vulnerable,” Schaer said. “They are single mothers, the elderly, and families struggling to make ends meet before the storm. No one seemed to be speaking for them. These are people who have yet to receive the relief that was promised them.”

The bills seek to freeze all foreclosure proceedings on properties wrecked by Sandy, as long has the property wasn’t in foreclosure prior to storm. The mortgages would resume within 60 days of the owners returning home.

The bills also would protect homeowners from foreclosure in future disasters, an important feature for people who live in flood areas along the Raritan and Passaic River basins, as well as the coast.

“This is not a handout,” Schaer said. “We wanted to craft a bill to answer the short-term needs for people who are behind on their mortgages through no fault of their own.

“We want to give people 36 months – that seems to be the time it takes – to recover from a disaster without the threat of foreclosure.”

Almost all the people in this situation are there because of the hallmark factors of this slow recovery. Insurance fraud. Contractor malfeasance. Bureaucratic entanglement.

“The state blames the feds, the feds blame the state,” Schaer said. “Let’s stop playing the blame game and come up with solutions.”

That’s a welcomed message for Nancy Wirtz, whose small house in the Forked River Beach section of Lacey Township was flooded and severely damaged when two trees fell on it during Sandy.

A contractor charged her $55,000 to demolish the house and then disappeared. Wirtz now has no house, no money and the bank bearing down on her.

“I’m lost,” she told the Assembly’s Housing and Community Development Committee during a hearing on the bill in June. “I don’t know what to do.”

Amada Devecka-Rinear, who formed a group to lobby for Sandy victims, said the bills is “welcomed” and “good” but doesn’t go far enough.

“I think this bill was chipped away at by the banking lobby,” said Devecka-Rinear, executive director of the New Jersey Organizing Project. “It originally included all Sandy victims. Now, it’s just those in RREM and LMI (who must be primary homeowners to qualify for those programs).

“But what about second homeowners and people who own rental properties?” she said. “They’ve had to deal with some of the same issues, like low insurance payouts or bad contractors.

“I think the bill is good and needed,” she said. “But we’re going to push back and see if we can get it expanded. These people have suffered enough. The banks should give them a break.”