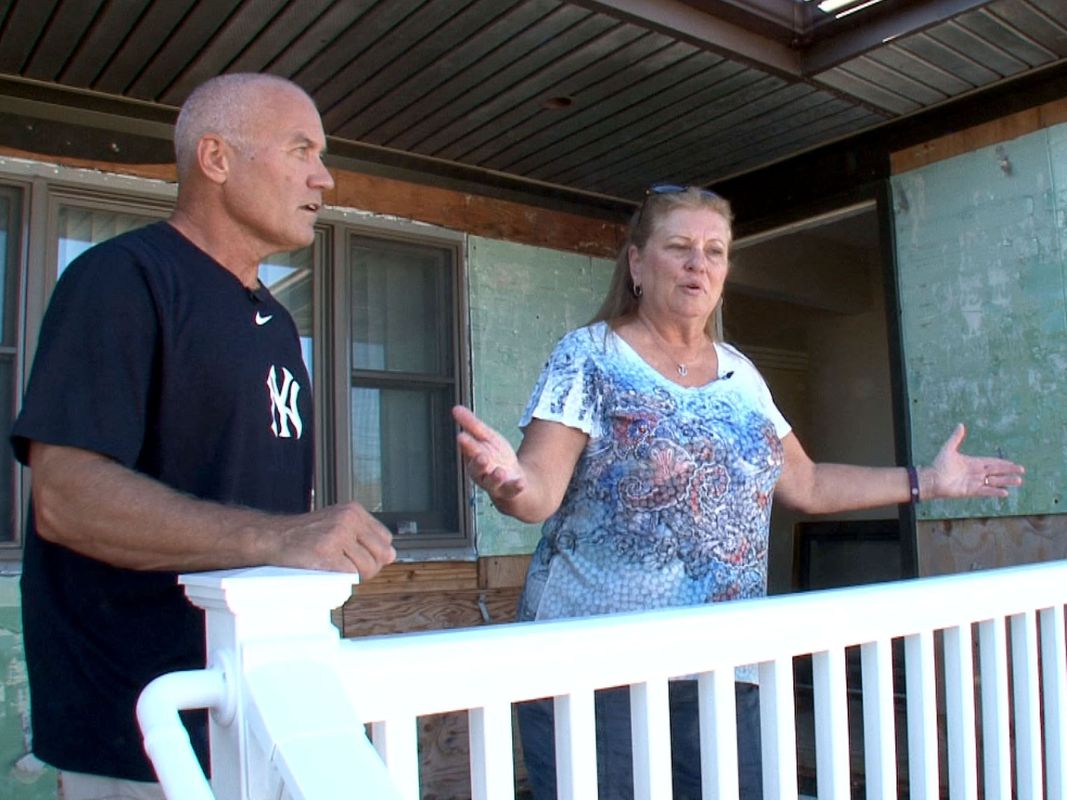 Key findings:
► A loophole in the law allows convicted felons to receive state approval to do home improvement work
► A number of Sandy-affected homeowners who believed the state had done background checks on contractors hired a man who had defrauded others across the nation
► The convicted fraudster ripped off two dozen homeowners and employees for more than $1.8 million. It took the state four years to catch up with him.

He made sympathetic phone calls to the couple when their daughter was hospitalized for pregnancy complications. Soon after, he mourned with the family when the Wisniewskis’ grandson, born prematurely, died five days after birth. He donated to the March of Dimes charity in honor of their grandchild.

Nearly five years after Superstorm Sandy hit, Mark and Diane Wisniewski are still in the process of rebuilding their Toms River shown October 29, 2017. They were one of the many victims of fraudulent contractor Jamie Lawson.

And on Christmas Day in 2014, Lawson’s son brought over a bottle of wine as a gift — a thank-you to valued customers from Lawson’s company, J&N Construction.

Lawson, 42, was the Wisniewskis’ contractor, hired to lift and renovate their superstorm Sandy-damaged home on Woodhaven Road in the township.

The Wisniewskis thought they had landed an ideal contractor — one who was skilled, trustworthy and compassionate. And so, they paid Lawson, the owner of J&N Construction and Elevation, $115,000 in federal relief funds over several months, starting December 2014 and ending October 2016.

Then the red “Stop Work” order appeared — a sheet of crimson paper plastered in the middle of the work site that was in such shambles it more resembled a war zone than a home under construction.

As he had done in numerous states over the past 20 years, Lawson moved from one natural disaster to another, fleecing homeowners in desperate need for their residences to be fixed.

In New Jersey, in the wake of Sandy, Lawson found his mother lode.

Victims said Lawson properly performed a few jobs once he began business in Brick to give customers a glimpse of his work, then began defrauding residents with abandon. All the while, Lawson was actively registered with the state Division of Consumer Affairs as a home improvement contractor.

“Honestly, he was very, very caring, and that’s how he got into everybody’s lives – to gain his trust.”

In the eyes of homeowners, Lawson’s valid registration was the New Jersey seal of approval.

But, because of a loophole in the law, the state never checked if Lawson had a criminal history.

Had criminal background checks been in place at the time Lawson became registered with the state in late 2012, it’s unlikely Lawson ever would have been approved — and also unlikely that more than two dozen vulnerable homeowners would have lost more than $1 million in federal and personal funds at the hands of a scam artist.

“There’s got to be some kind of background check,” Diane Wisniewski said. “It makes no sense to me. And I think a lot of this can be avoided, and could in the future be avoided, if they change that. That’s important.”

It took four years for the law to catch up with Lawson.

In December 2016, Lawson was indicted by an Ocean County grand jury on criminal charges related to his contracting business, in which authorities alleged he took hundreds of thousands of dollars from dozens of homeowners in Monmouth and Ocean counties and partially completed jobs, or not at all.

At the time the indictment was handed up, a spokesman for the Ocean County Prosecutor’s Office said Lawson had also been accused of construction-related offenses in numerous southern states directly related to his contracting business.

Shortly after Lawson was charged in the indictment with theft by failure to make required disposition, money laundering and tampering with public records — in connection to the false home improvement contractor application Lawson submitted in November 2012 — he fled the state and became a fugitive.
It wasn’t his first go-around with the law.

James “Jamie” Lawson, a home contractor who is accused of stealing $1.5M from more than a dozen homeowners by agreeing to do work – then bailing, smiles at some of the people he defrauded during his detention hearing in State Superior Court in Toms River Friday, July 7, 2017.

Over the last 20 years, Lawson had been charged dozens of times, extradited on arrest warrants and convicted of various crimes three times, according to court records and court officials in several states. He was found guilty of assault with a deadly weapon in North Carolina, violation of a business license in South Carolina and theft of property in Texas. He was charged with theft in numerous states, arson and threats to perform acts of violence in Oklahoma and domestic assault in Tennessee.

Dozens of other charges – misdemeanors and felonies – were dismissed, either because Lawson accepted plea deals, paid restitution and court costs, or because authorities lacked sufficient evidence, court officials said.

“Over the last 20 years, Jamie Lawson was charged dozens of times and convicted three times.”

Six months after Lawson fled New Jersey, he was arrested at an extended-stay motel in Florence, South Carolina, by officers from the U.S. Marshals Service.

Lawson’s lawyer, Keith Oliver, declined to comment for this story.

This month, Lawson pleaded guilty to theft and money laundering and admitted to stealing $1.86 million from more than two dozen homeowners in Monmouth and Ocean counties. Some of the $1.86 million included money that should have been paid to J&N Construction workers in exchange for labor, said William Scharfenberg, senior assistant prosecutor with the Ocean County Prosecutor’s Office. Lawson faces up to 10 years in a state prison. His sentencing date is scheduled for Dec. 1.

“They say he was a professional con man,” Diane Wisniewski said, recalling what investigators told her. “I mean, he practically joined our family. Honestly, he was very, very caring, and that’s how he got into everybody’s lives — to gain his trust.”

And in the time the money was dispensed, complaints were filed against thousands of home improvement contractors alleging everything from shoddy work to theft.

In the deluge of home improvement contractors accused or convicted of fraud, Lawson stood out because of the magnitude of his crimes and a history that showed he defrauded homeowners in other states whose homes had been ruined by tornadoes and hurricanes.

But state records that show how many contractors lied about criminal convictions remain scant.

The Division of Consumer Affairs, which oversees contractor registration, denied a public records request asking for a list of people who were found to have lied on the disclosure statement of the home improvement contracting registration. The agency said the Home Improvement Registration Unit “does not keep a list that compiles the type of information you requested.”

Nearly five years after Superstorm Sandy hit, Mark and Diane Wisniewski are still in the process of rebuilding their Toms River shown October 29, 2017. They were one of the many victims of fraudulent contractor Jamie Lawson.

‘I can’t explain it’ In New Jersey, approximately 48,703 home improvement contracting businesses were actively registered with Consumer Affairs as of Oct. 20, according to the Division’s registry.

In 2016, state authorities cited 136 home improvement contractors and said the contractors’ violations totaled to about $1.9 million in fines and restitution, although not all the cases were resolved. In the same year, the Consumer Affairs brought six civil cases against contractors who allegedly bilked more than 100 customers who needed construction work done on their homes following Sandy. About 99 victims lost $3.8 million in federal relief funds, according to the Division.

The number of citations issued to home improvement contractors was similar for 2015.

In a recent survey conducted by the New Jersey Organizing Project, an Ocean County-based organization that advocates for Sandy victims, 22 percent of people reported they were not yet home.

The survey received 551 responses in total.

“I can’t explain why this didn’t come up.”

“It is very frustrating at times to see very common-sensical measures not being acted upon,” said Assemblyman Brian Rumpf, R-Ocean, who has been a lawmaker since 2003 and represents southern Ocean County. “Not only are these folks victimized by being abandoned from their homes – to add to that, they are then further victimized by being defrauded.”

All of the half-dozen Democratic and Republican state legislators who spoke with or relayed statements to the Press said they did not know why a law requiring home improvement contractors to submit to criminal history background checks was not in place, although numerous jobs – from office workers to nurses, to teachers to fast food cashiers – require some sort of history check.

‘It was like a washing machine’In the summer of 2015, Rich and Allison Bindell believed they did their homework before they chose Lawson as their contractor to fix their Cattus Street home, which was pummeled by superstorm Sandy.

Four feet of water had damaged thousands of dollars in property and caused the family to lose everything they had on the first floor of the house located near the Toms River waterfront, Allison Bindell said.

“The water didn’t just come up and rise up,” she said. “It was like a washing machine. So everything that was in my family room was in my washroom.”

After the Bindells saw Lawson was registered with the state and checked out some of Lawson’s previous construction work, the Bindells hired him to elevate their house and repair damage.

Paperwork was filed with the township, and in April 2016, the Bindells said they moved out so construction work could start.

Lawson got the house in the air, Rich Bindell said. But then, after making some progress on construction, he said Lawson stopped showing up to work on the house.

The Bindells said choosing Lawson was a mistake — a mistake that cost them $99,000, and more than a year out of their home.

The Bindells’ home is now being repaired by Legacy Custom Home Builders, a local company that the Bindells hired this summer. In about a month and a half, the Legacy construction team worked efficiently on the home, to the Bindells’ delight.

But in about three or four months, after an unexpectedly long and stressful journey through state agencies and the Ocean County Prosecutor’s Office, Rich Bindell said he expects his family will move back into their original home.

‘There are enough bad apples’Assemblywoman Amy Handlin, R-Monmouth, thinks New Jersey is an overregulated state. But consumer protection, when it comes to home improvement contracting, is one of the areas she said she wants to strengthen.

“The industry doesn’t like this notion of painting them all with the same brush,” Handlin said. “I understand that, and I don’t doubt that most of them are responsible and law-abiding, but there are enough bad apples to sour the whole barrel, from the perspective of consumer advocates.”

Handlin’s proposal, which likely will not be formally introduced until after the November general election, would require home improvement or home elevation contracting applicants to be fingerprinted. She said the fingerprints would be run through FBI or New Jersey State Police records to check for conviction records.

The applicant would pay the cost of the background check, which would likely be more than $50 but less than $100, Handlin said.

As the proposal currently stands, the background check would apply to the owners of the company, said Leigh Maris, Handlin’s chief of staff.

“The industry doesn’t like this notion of painting them all with the same brush.”

Ideally, under bills she proposed, Beck said contractors would have to disclose all major corporate owners to the state and establish a $25,000 surety bond to cover any damage or problems that affects the homeowner.

As Beck grapples with steering her bills through the legislative process, she said she wonders if the bills contribute to smart reform or excessive bureaucratic hurdles.
​
“There is a balance,” Beck said. “But, in this case, the Division of Consumer Affairs can tell you that for clear-cut cases of fraud, that they are oftentimes finding their hands are tied because the statute isn’t strong enough. Then that’s on us to try to figure how to tighten it up.”
​