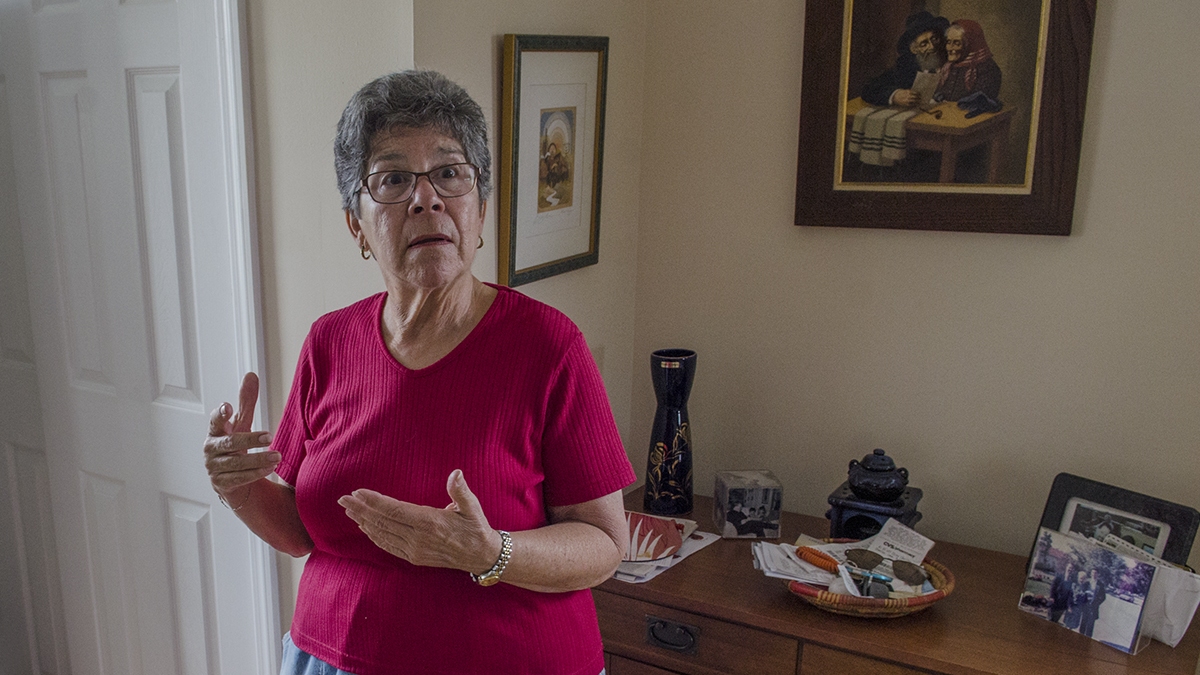 opens in a new windowAgencies have ‘clawed back’ more than $5 million in Sandy aid from New Jerseyans – By Joe Hernandez, NewsWorks

When Fran Baronowitz returned to her Ventnor, New Jersey, home four days after Superstorm Sandy, the front door was jammed. Floodwaters inside her house caused the floorboards to buckle, pushing the carpet up against the doorway. She entered through the back to find all her furniture saturated, ruined.

A prized piano was reduced to a heavy piece of garbage.

Baronowitz used federal and state aid to repair her home and reinforce it against future storms. She got new flooring in the kitchen, new front and back porches, new walls. A crew raised her house 6 feet off the ground. Finally, after two years, Baronowitz had recovered from Sandy.

“I thought I was through with it,” she said, “until I got that letter.”
​
Last August, two years after Baronowitz had moved back home, she received a notice in the mail demanding she pay back $35,174.34 in state aid. The letter said Baronowitz had “duplicated” her benefits by accepting overlapping federal and state aid. Contractors also repaired her house in ways that lacked state approval, such as using vinyl composite for the porches instead of wood.

“I’m on a small income,” said Baronowitz, a retired medical secretary. “I don’t want to go into my savings if I can help it. But if I have to, I will.”

Since Sandy battered the Jersey Shore nearly five years ago, hundreds of residents who received government funds to rebuild their homes have had to pay some of it back, what the government calls a “recoupment.”

So far, almost 1,000 New Jersey homeowners have paid back more than $5 million in federal and state aid meant for Sandy rebuilding, WHYY has learned. Many more have yet to reimburse the agencies for overpayments.
​
Officials at the Federal Emergency Management Agency and the New Jersey Department of Community Affairs, which disbursed storm-relief funds, say the recoupments happen because of ineligible expenses or duplicated benefits.

Homeowners are warned of those risks ahead of time, the officials say.

But state and federal lawmakers are now proposing changes to how disaster relief agencies recover their money, citing a recoupment process that can send struggling homeowners back into financial ruin.

The DCA-administered Reconstruction, Rehabilitation, Elevation, and Mitigation program — known as RREM — is New Jersey’s largest pot of state money for Sandy victims, funded by block grants from the federal Department of Housing and Urban Development.

Affected homeowners could also receive aid directly from federal sources. FEMA approved more than $1.4 billion in aid to Sandy victims, often in individual assistance paid through the National Flood Insurance Program. Other agencies, such as the Small Business Administration, also gave out financial assistance after Sandy.

All told, billions of dollars flowed into New Jersey after the storm. A DCA spokesperson said more than 6,000 participants in the RREM program have returned home.  A thousand more are expected to wrap up repairs this year.

But moving back home is not always the end of the recovery process. In fact, for some, it means the beginning of a new nightmare.

When work on a Sandy-damaged home is finished, agencies conduct a final review of the homeowner’s grant. That’s when the agency determines whether it needs to recoup any of the money it gave out.

A recoupment could arise for a variety of reasons: The homeowner simultaneously took state and federal aid that could be considered a duplication of benefits; the contractor spent money in ways that were not approved by the agency; or the overall cost of construction was less than expected.

Agencies say they have no choice. They’re legally required to recover overpayments. The entire process is subject to the federal Stafford Act, which mandates that homeowners cannot “receive funds from multiple sources for the same purpose or in excess of what is allowable to repair or rebuild their home,” said DCA spokeswoman Lisa Ryan in an email.

Agencies also say they inform aid recipients multiple times in advance and in writing about what constitutes a “duplication of benefits” and the possibility of recoupments.

Yet while the recovered funds are only a tiny fraction of the total aid given out to Sandy victims, they often loom large for the homeowners who have to repay them.

And as more Sandy victims have moved back home after construction, the recoupment process has been receiving increased attention.

Homeowners who spoke to WHYY acknowledged that agencies informed them about the risks of later recoupment. But the application process for disaster relief aid was confusing, many said, and rife with complex documents written in confounding legalese.

That confusion often caused what advocates call “clawbacks” of relief aid reaching into the tens of thousands of dollars, they said.

“People have the impression that every step of the way they’ve done what RREM asked,” said Amanda Devecka-Rinear, director of the New Jersey Organizing Project, a nonprofit that formed after Sandy. “They’ve signed the papers, they went through this thing … And then they get the letter, and it doesn’t make any sense.”

Federal and state lawmakers now aim to improve the recoupment process, so homeowners are better informed about the rules and have more leeway in paying back what they might owe.

“If you made a payment, and a supervisor later decided, ‘I wouldn’t have made that payment,’ they can’t go back and claim the money back from somebody,” said U.S. Rep. Tom MacArthur, the Republican representing New Jersey’s 3rd District and a former insurance executive. “It’s not something that I experienced in my insurance life.”

MacArthur introduced a bill last month that would force FEMA to recoup any disaster aid within three years after the money is awarded. “This idea that years later they can do audits and change their minds is what I’ve tried to put an end to,” he said. The bill passed a House committee last week.

Legislation at the state level would overhaul the DCA recoupment process even more comprehensively, incorporating some procedures already in place at FEMA.

Sponsored by four New Jersey Assembly Democrats, the bill would outline a step-by-step process for DCA to follow when recouping disaster aid, including sending a notice to the homeowner with information about how to repay.

The bill would lay out a few payment plan options; force DCA to take into account homeowners’ income and hardship conditions when setting payment amounts; and create a formal appeals process, something FEMA already has. The legislation passed the Assembly unanimously.

Although DCA has no formal appeals process for recoupments, homeowners have said that discussions with DCA representatives can often lead to lowering how much is owed. Baronowitz, the Ventnor retiree, was able to reduce her repayment number by about $19,000.

Despite the steps toward revamping the recoupment process, homeowners with debt letters in hand remain on edge.

“I have so much anxiety. I have so much stress every time a storm comes through,” said Julie Suarez of Little Egg Harbor. “It doesn’t even have to be here. I watch flooding on the news, and I’m like breaking down crying for people in Louisiana that I’ve never met.” (Suarez and Baronowitz are both members of the New Jersey Organizing Project.)

The road to recovery has taken a toll on Suarez, a public school teacher with a daughter in college. Her house was uninhabitable after Sandy, so DCA helped her build a new one on the same site. Despite hiccups during the rebuilding process, Suarez and her family moved into their new home less than two years after Sandy.

Then she got a recoupment letter.

At first, Suarez was asked to pay back around $51,000, a fifth of the total government aid she received. But the DCA cut the debt roughly in half after negotiating with her. Still, paying it would not be easy.

Suarez said she’s willing to pay back what she owes. DCA claimed she duplicated benefits when she received aid from SBA and NFIP, though the reasons for that are still unclear to Suarez. But she knows that she cannot pay back the full amount in three years, the time limit set forth in the letter. And she worries that paying small amounts toward the debt now may be for naught if the state imposes a higher interest rate or puts a lien on her house at the end of the three-year period. (DCA says it can send the unpaid debt to the Department of Treasury for collections.)

Suarez says the recoupment process feels a lot like the rebuilding process — the long phone calls to DCA, the reams of paperwork, the stress. Victims, she said, are being victimized again.
​
“You put all these people who have been through literally emotional, physical, financial hell for the past however many years it’s taken us to get back home,” she said, “and throwing this on top of it. Here’s your big, fat cherry on the cake.”