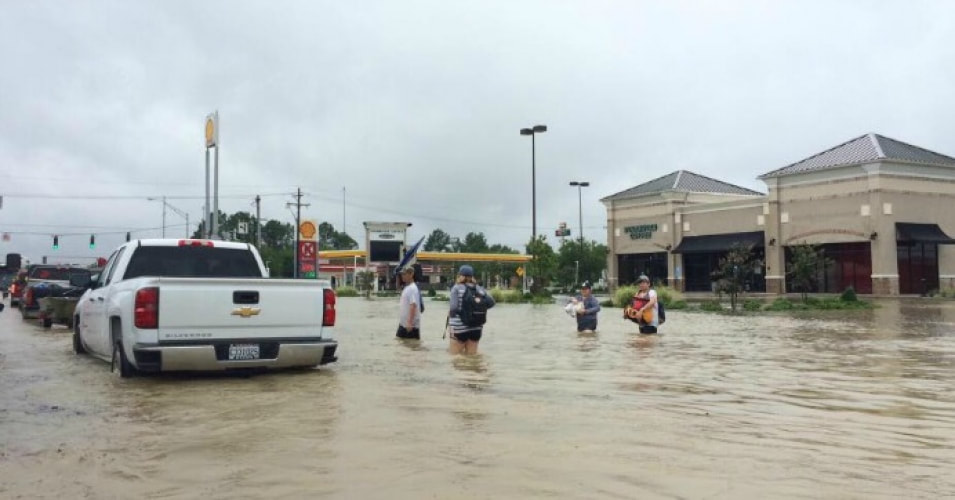 opens in a new windowThe New Normal: Organizing to Break the Cycle of Climate Disaster by Rae Breaux

The record-breaking floods in Louisiana are the latest example of what many working people already know all too well: climate change has already begun, and it is wrecking our communities.

So far, over 30,000 people have been evacuated from their homes, 10,000 people are in shelters, and those numbers are rising. The shelters themselves are experiencing flooding, and some families have already been relocated multiple times. At this point, almost 30 parishes have been declared major disaster areas.

Our communities are literally underwater due to the extreme weather and sea level rise brought on by climate change. Just a month and a half ago, West Virginia experienced a “1,000-year flood event.” The Elk River was measured at its highest levels since such measurements began in the 1880s. Whole towns went under water, a burning house floated down the river at White Sulphur Springs, and 24 residents lost their lives to the deluge. Just a few weeks before that, Texas Gov. Greg Abbott declared a state of disaster across 31 counties in Texas due to flash floods.

These storms are the new normal, and their impacts are dramatic. Superstorm Sandy hit in late 2012, and there are still communities in parts of New York and New Jersey that haven’t been rebuilt – families that are still displaced, almost four years later.

We know that pollution from the extraction and burning of fossil fuels has historically affected working-class communities and communities of color. With higher asthma and cancer rates, our families have long borne the burden of the same industries that are accelerating sea-level rise and extreme weather. We are now facing the facts that “unprecedented” storms, rainfall and flooding are no longer without precedent. In fact, what we are seeing now is but a sobering preview of what we should all come to expect.

It may be tempting to throw up our arms, declaring that there’s nothing we can do, that we are woefully unprepared. But we know better. There is something that we can do, and it’s something that we know how to do quite well. We need to organize. We must intervene at every level to ensure that our systems for prevention and recovery start doing their jobs effectively and accountably.

One opportunity for intervention, the reauthorization of the National Flood Insurance Program (NFIP), will soon be upon us. The NFIP was established in 1968 through the passage of the National Flood Insurance Act to provide government-backed insurance protection in flood-prone areas, a market from which private insurance companies had been withdrawing. If you have a mortgage, and if you live in a floodplain where FEMA designates it is required, then you have to have national flood insurance. While it is mandatory for homeowners in floodplain communities, it has proved to be a wholly inadequate response to the challenges that they face. In fact, the process for getting a payment from your flood insurance turns out to have been rife with fraud and underpayment, delays and complications that have cost families their homes and economic stability.

We saw this after Superstorm Sandy, when families up and down the mid-Atlantic coast filed flood insurance claims assuming it would be OK. It was not. A PBS Frontline special, “The Business of Disaster,” that aired in May profiled Sandy survivors in New Jersey and New York, many of whom are still waiting for a fair insurance settlement and still struggling to rebuild. Their report “found that their private insurance companies that administer the government’s flood program made as much as an estimated $240 million to $406 million in profit annually over the past four years.” Which is to say, they made roughly $400 million in profit off Superstorm Sandy-affected communities.

As we re-imagine programs such as the NFIP, our communities must come first before big insurance companies and outside developers. We know that the frequency of extreme weather is only increasing, and we need the programs and the funds in place now to support mitigation, preparation and recovery. If we cannot effectively oversee and monitor the private sector’s participation in these programs, then we should de-emphasize or even eliminate its participation. In short, these programs must be rebuilt now to place people and planet before profit.

Storms are just the beginning. Flood survivors often say the storm was the easy part when compared to the road of recovery. Neighbors, community members, and families have come together in flood after flood to rescue one another, to help clean up and to rebuild together. Flood survivors everywhere have stories of the people who’ve touched their lives, who’ve reminded them what our communities are capable of. We must come together in that same way, now, to make sure that our government programs work for us – not Wall Street corporations. And, if experience is any indication, that’s just what we’re going to do.
​
With Amanda Devecka-Rinear, New Jersey Organizing Project, and Gary Zuckett, West Virginia Citizen Action Group.