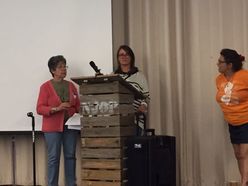 The convention was held Oct. 13 at the Ocean Acres Community Center in Manahawkin.

Oct. 29 will be the sixth anniversary of Sandy, and 19 percent of the 7,690 families that qualified for Reconstruction, Rehabilitation, Elevation and Mitigation and Low-to-Moderate Income grants still haven’t finished their projects, said NJOP Executive Director Amanda Devecka-Rinear.

The grants were funded by more than $4 billion from the federal government and administered by the state Department of Community Affairs.

A large number of those who got assistance are being asked to pay back an amount the government has decided was overpaid. Called “clawbacks,” the demands for repayment of tens of thousands of dollars are putting additional stresses on families that have already been pushed to their limits, said Jody Stewart, of the Mystic Island section of Little Egg Harbor Township.

“I had 42 inches of water in my home,” Stewart said, who used grant money to repair and raise her home.

“Then we struggled with a clawback. The government wanted $20,000 back, even though we never got enough money.”
​
Luckily it turned out the government’s paperwork was wrong, Stewart said. She did not owe any money after all. But it was stressful fighting it for a while, she said.

Sandy survivors started the New Jersey Organizing Project to better advocate for rental assistance, disaster aid and to help people who were running into roadblocks.

It is still focused on making sure families can get home and hang on until they make it home, said Devecka-Rinear.

But the group has added two big issues onto its plate, she said. It is working for affordable health care — in particular expanding access to treatment for those with opioid addiction — and for reform of disaster recovery systems so they work better for families and prepare communities for future flooding and storms.

Many people affected by Sandy suffered physical or mental health issues in the years that followed, Devecka-Rinear said.

Nancy Caira, of Waretown in Ocean Township, said her husband had a heart attack soon after Sandy, putting him out of work and complicating their ability to help pay to raise their home 13 feet. Even though they have a RREM grant, they ran into many complications and still haven’t started the work, she said.

Caira spoke at a workshop on storm recovery and preparing for future storms, along with the Union of Concerned Scientists’ Shana Udvardy, one of the authors of “Underwater: Rising Seas, Coastal Floods and the Implications for U.S. Coastal Real Estate,” and Jason Tuber, a senior adviser to Sen. Robert Menendez. Tuber talked about reforms Menendez, D-N.J., is seeking through legislation for the National Flood Insurance Program.

As of Sept 28, Devecka-Rinear said, the state’s figures show there is about $1.2 billion in unspent Sandy recovery funding, some of which could be redirected to better aid families.