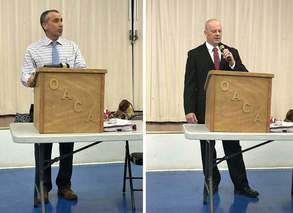 The Ocean Acres Civic Association hosted a candidates night on Tuesday, Oct. 9, that packed the Ocean Acres Community Center. The format was a straightforward series of three-minute speeches from each candidate, introducing who they are and what they believe in. No questions were taken from the public. A coin toss gave the Democrats the floor first.
​
Brian White is a criminal defense attorney who cares deeply about the opioid crisis. He said he wants to solve the underlying addiction problem by partnering with citizens. The Blue HART (Heroin Addiction Response Team) program and the On Point program (for mental health assistance) are two ways the Stafford Police Department already helps. Additionally, he would like to beef up neighborhood watch efforts and drug education. “We need to think outside the box,” he said, to win the war on drugs and overdoses in Stafford. He feels his team is “a great group of people, doing this for the right reasons.”

Joanne Sitek has been a resident of Beach Haven West for over 20 years. She retired to the shore after a long, rewarding career in teaching and counseling. She was brought up to help people, she said, which is what motivated her to run for town council previously and serve as liaison to the recreation department, school system and senior citizens. She described the Focus on Stafford team as service-oriented and diverse in terms of age and gender. One of her concerns is finding solutions for the vacant storefronts in town.

Nicole Downs is a partner in a law firm and has a lot of experience in municipal law. She’s lived in town 15 years, has four children, volunteers as a soccer and cheerleading coach and sits on the boards of the American Cancer Society and Ronald McDonald House. She’s interested in working on ordinances to address the issue of abandoned and foreclosed houses, one of which would require bank registration of foreclosures, which would generate revenue and help improve communication between property owners and the town. “I’ve seen the positive effects in other towns, and I want to bring that experience to Stafford,” she said.

Chris Marzullo is a technologist (computer systems engineer) who has lived all over the world and chose to put down roots in Stafford for the quality of life and services available. As a new resident, he is enthusiastic about life and eager to dive into some complex issues. For one thing, he wants to dissect the town’s technology contracts and introduce the “My Stafford” smartphone app as a way to report potholes, downed power lines, flooding, etc.

Joe Mangino has lived in town since the mid-’90s. He is a small business owner, a wedding officiant, an oyster shell recycling program volunteer, president of the New Jersey Organizing Project, a member of the Stafford Township Board of Education, and sports coach. “As you can see, my community matters to me,” he said. He intends to govern in a manner that is both fiscally responsible and forward-thinking. “I’ve always put issues and people above party politics,” he said.

Leading off the Conservatives’ introductions was Tony Guariglia, a doctor of pediatric emergency medicine at Southern Ocean Medical Center. He has four children, one with special needs. When he was interviewing at different hospitals, he said, he chose to make Stafford his home because SOMC was the one place where every person he encountered greeted him warmly.

In terms of his priorities for the town, he said first responders are at the top. “The opioid crisis – it’s bad,” he said. Emergency personnel deserve adequate funding for equipment. He, too, believes drug education is the key to solving the problem.

Mike Pfancook is a 43-year resident of the town, with three children. He’s an avid outdoorsman, hunter, fisherman and golfer, an NRA-certified handgun instructor, a union electrical worker, and a volunteer with Boy Scouts and the Toy Run Foundation. He entered politics in 2009 when the council started laying off police, he said. “I love my country; I love my president.” He was prompted to run for office because “it’s time to be a voice and an ear for residents.”

George Williams is “fed up with politicians’ unkept promises.” The financial adviser and member of the Ocean County Bowlers Association Hall of Fame has lived in town 11 years and wants to be “a public servant, not a politician.” He believes the government should be built on principles of respect and rational thought, more transparent and less wasteful. He believes in personal responsibility, the Constitution and the “MAGA” mindset.

Bob Henken-Siefken is a resident of 19 years, a sports coach, a motorcycle enthusiast, a member of Bikers for Trump, a NASCAR fan and father of four who wants to “give a voice back to the community.” He “won’t let anyone be marginalized.”

Paul Krier moved to Stafford in 1997 and has two children with his wife, Ocean Acres Civic Association President Kate Krier. He served as a councilman from 2013 to 2015. The best part of that experience, he said, was working with the residents. He wanted the audience to know: “I’m here to represent you.”
​
Greg Myhre, a member of the Ocean County Republican Club’s screening committee, believes “working together is the best way to achieve goals.” He supports every Republican on the ballot, including the POTUS. “Now is not the time,” he said, “to experiment with liberal Democrat policies on any level.”

Not in attendance were Democrats Kevin Teeple and Denise Pobicki and Republican Tom Steadman. After the formal introductions, audience members (all 120 or so) lingered to enjoy refreshments and ask questions and converse with the candidates directly.

Among the crowd, Bea Michelson, age 102 and a lifelong Democrat, said this year she decided to change parties and vote Republican for the first time ever. Her reason? The Democratic party just isn’t what it used to be, she said, and “it’s time to change.” She does not approve of what she sees as a slide toward socialism. She believes in the original words of the U.S. Constitution. For her, watching Supreme Court Justice Brett Kavanaugh’s Senate Committee hearings evoked her sympathy, from a moral perspective. “It was just terrible, how they treated that man,” she said.

With regard to the campaign, Myhre said he feels optimistic. His impression is residents like his team’s message and non-aggressive agenda.

Asked if he plans to fire Township Administrator James Moran, Myhre said it would be inappropriate for him to comment on personnel issues but that “we’d have a lot to talk to him about.”

“I have read that Mr. Moran had filed for retirement, and I would accept his retirement,” Myhre said. (Moran, in a separate previous conversation, had dismissed the rumor that he plans to retire.)

The Beach Haven West Civic Association will host another meet-the-candidates event on Friday, Oct. 19, at 7 p.m., at the Bay Avenue Community Center.