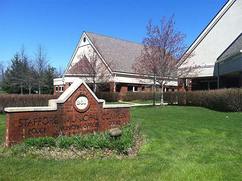 STAFFORD – After many years of seeing Mayor John Spodofora sit on the dais of Stafford Township Council, residents will see a new candidate take that seat following this year’s general election; possibly even ushering in a new era for Stafford Township.
​
The two contenders for the mayoral vote are Gregory Myhre and Joe Mangino. Myhre, a staunch “Make America Great Again” Republican, and Mangino, and outspoken Democrat, are vying for a three-year term as mayor of Stafford.
Representing opposing sides of the political spectrum, residents will have a big decision to make come Election Day on November 6.

Myhre is a resident of the Ocean Acres section of Stafford Township where he lives with his wife Amber and three children. While he is employed as the operations manager for a computer network integration firm, he does boast some experience in civil service as a former elected member of Ocean County Republican Committee and Ocean County Republican Screening Committee.

“I am a member of the Ocean Acres Civic Association where I have participated in neighborhood clean-up efforts. I am also active with my son’s Cub Scout pack,” added Myhre.

Myhre is the leader of the self-titled Stafford Conservatives who believe Stafford is in need of defense against “Governor Murphy’s far left policies and becoming a sanctuary town.” Alongside Myhre are Thomas Steadman, Anthony Guariglia, Michael Pfancook, George Williams, Robert Henken-Siefken, and Paul Krier.

Together, the conservative team list top concerns for the township as fiscal stability, the opioid epidemic, and the success of small business.

“We will work with department heads to identify priorities to ensure that tax dollars are spent efficiently. We will also explore expanding shared service agreements with neighboring towns where it makes sense to do so,” he told Jersey Shore Online. “The opioid epidemic is a top concern and we will work with the police department to identify areas that need more attention.

“We are fortunate to have Dr. Anthony Guariglia on our team and he regularly deals with patients who have overdosed so he will be an invaluable asset as we work to mitigate this crisis.”

One of the Stafford Conservatives’ main platforms is small business growth.

“There are too many unoccupied buildings and store fronts. Repealing unnecessary regulations can help bring business back to our town and also encourage existing businesses to stay,” said Myhre.

Greg Myhre and his family (Photo courtesy Stafford Conservatives Facebook)While Myhre and his team have already begun laying out their plan of attack on some of these issues – some of which you can find on their page – he does not define their agenda as aggressive.

“We believe that listening to the concerns of residents is one of the best ways to identify priorities now and in the future,” he explained. “Improved communication can help to deliver better results, there will be more community outreach events and we will brief the residents on any significant issues in town through announcements at town council meetings and on the town website.”

Joe Mangino
​
Listening to resident concerns is an ideal that Democratic candidate Joe Mangino can get behind, as his slogan is “Focus on Stafford.” Mangino preaches that “when you vote for me, you’re voting for yourself” because he intends to be the voice of the Stafford residents.

Mangino lives in the Beach Haven West section of Stafford Township with his wife and two kids.

Mangino announced his candidacy for mayor on August 22. His name was not on the ballot during the primary election, and even came as a surprise to some residents.

Mangino and his team of Democrats were a write-in ballot, for which Mangino changed his party affiliation from Independent to run. He is flanked by fellow Democrats Joanne Sitek, Brian White, Nicole Downs, Kevin Teeple, Denise Pobicki, and Chris Marzullo.

Joe Mangino speaking at an event. (Photo courtesy Joe Mangino Facebook)“After the primary election, people reached out to me to get involved,” he explained.

Mangino is not only a mayoral candidate, but also a member of the Stafford Board of Education since 2017, board president of the New Jersey Organizing Project, co-founder of START (Stafford Teachers and Residents Together), and is employed in the field of wood restoration and power washing.

Unlike Myhre, Mangino does not believe Stafford is in danger or vulnerable to other powers.

“I don’t think Stafford is in a crisis…I don’t think major changes need to be made,” he said. He plans to focus on maintaining Stafford as the great town it is, doing that at a lower cost to the taxpayer if possible, he said.

A significant part of Mangino’s work has been to advocate for Superstorm Sandy survivors as well, which is why he noted that prevention against future disasters will also be a point of focus for his team.

Mangino has already begun brainstorming new ideas that he hopes to bring to the town should he become mayor. These include working on rehabilitating or using abandoned bank-owned properties, as well as creating a “Shop Stafford” type of program to incentivize local commerce and provide rebates to property taxes.

“For the last six years I’ve done my best to be a leader and to have a positive impact in our community. From Sandy recovery to my volunteer life to my work on the school board I’ve taken ownership of our town. I love Stafford Township and you can’t stop that,” stated Mangino in the August 22 announcement of his candidacy.

In other election news, it became a point of contention when Mayor Spodofora announced his resignation from the Republican Club in order to support Mangino and the Focus on Stafford candidates in the election.

When several residents took their time during public comment at the Oct. 9 meeting to criticize Spodofora, he simply responded by stating: “I’ve known Joe for a long time…He is a very good man.”

In a letter to Republican Club President Richard Carlson, Spodofora explained his reason for resigning by stating he “simply cannot stay neutral, nor can I belong to a club that supports these (MAGA Republican) candidates.”

Stafford Mayor John Spodofora (Photo courtesy Stafford Township)According to a report by The Sandpaper, Spodofora was quoted saying: “My whole thing has always been about doing the right thing for the town. I don’t care if you’re a Republican or a Democrat – all I care about is the future of Stafford.”

Since the loss of the June 5 primary, Mayor Spodofora has been a good sport, offering to show Myhre and his team the ropes at town hall. Myhre has so far not accepted this offer.

In a final statement on the matter Spodofora said: “I continue to have great faith in democracy. However, I have an even greater belief in the people within our community. I remain proud of each of you who can look beyond your self-interests and concern yourselves with betterment of your community. I remain humbled to have served as your councilman and mayor and wish for continuing successes in Stafford.”

Residents can find more information on the individual Stafford Conservative candidate and their plan of attack at  opens in a new windowfacebook.com/StaffordConservatives.

For more information on Mangino and the Focus on Stafford democrats, visit  opens in a new windowFocusOnStafford.org/.