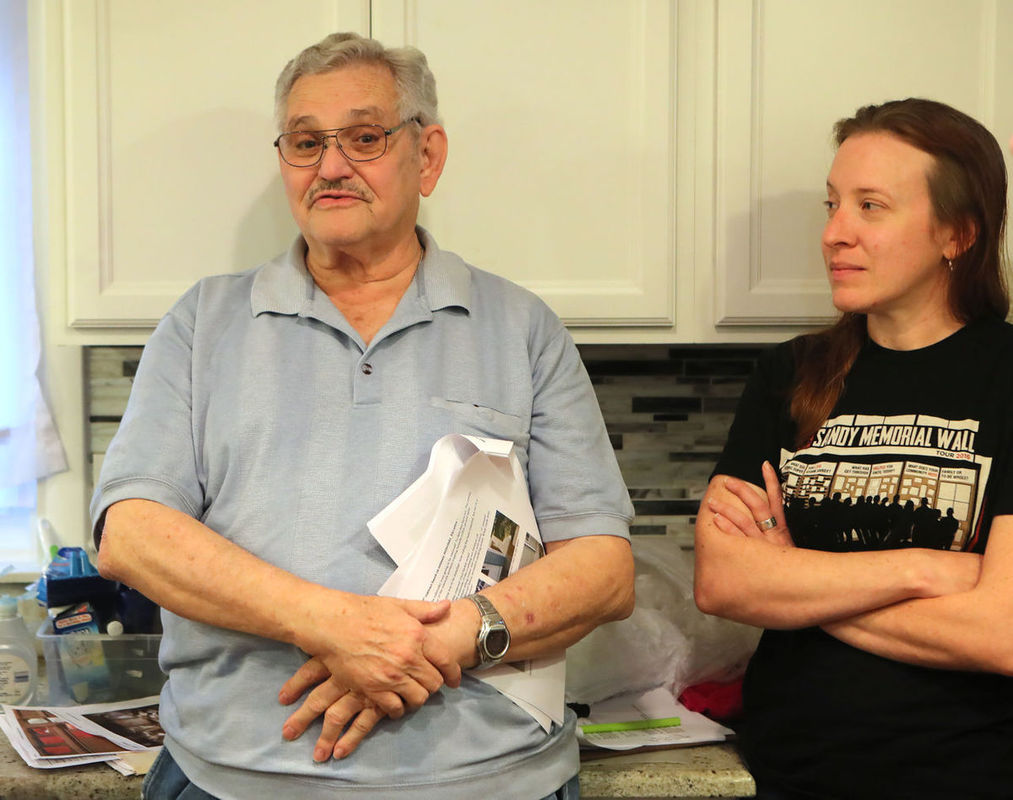 VENTNOR — In the kitchen of a Sandy-damaged house that can’t be lived in, a group of homeowners explained how they are still struggling with bureaucracy, contractor problems and incredible stress five years after the storm.

“We were right here when Sandy struck,” said homeowner Angel Eguaras, 80, of Ventnor, describing how the roof of his home partly peeled off and water streamed into the kitchen.

But in the five years since that day, he and his wife have had nothing but problems trying to get their home back into livable condition, he said to a group brought together by the New Jersey Organizing Project. NJOP formed to help homeowners with the rebuilding process after Sandy.

“We applied to the RREM (Reconstruction, Rehabilitation, Elevation and Mitigation) program, and contacted someone on the list,” Eguaras said of a state-provided list of contractors. Work done by the contractor was failed by city inspectors numerous times, he said, but the RREM program told him it couldn’t help him unless he could get the police to charge the contractor.

An engineer working with the contractor even reported work on the house was not done in accordance with its professional drawings and specs, Eguaras said.

Yet it took more than a year to get the police to charge the contractor, and he is convinced he was only able to get police action with the help of NJOP, he said.

Now he’s waiting for the RREM program to decide how to proceed, since his house needs to be raised again, as the first house lifting left it too low.

Amanda Devecka-Rinear, of the New Jersey Organizing Project, said the Democrats were invited to fill in for Assemblywoman Sheila Oliver, D-Essex, candidate for lieutenant governor on the ticket with Democrat gubernatorial candidate Phil Murphy. She was due to participate but had to cancel.

Deveka-Rinear said the Murphy campaign has been responsive to her organization’s requests that the needs of Sandy affected families be addressed in the campaign, but the Republican candidate Kim Guagdano’s campaign has not responded.

But she said District 2 Assemblyman Chris Brown, R-Atlantic, who is running for state Senate against Bell, has been helpful.

“We enjoy working with him,” she said of Brown.

Jason Johnston, of Ventnor, said his mother’s home is torn apart, without even walls or electricity, yet her contractor billed her for work not done.

“In a 100-yard radius (of her home) you can see houses up in the air” but unfinished, Johnson said. Contractors have walked away.

“Until we get help, the words you guys say mean nothing to us,” Johnston told the politicians there. “My mom is devastated emotionally and financially.”

Julie Suarez, of Little Egg Harbor Township, said the work on her home is finished, but then she got a letter from the state saying it mistakenly paid her $51,000 too much, and she had to pay it back almost immediately in what is known as a “clawback.” When she questioned the amount, the state dropped the total to $25,000. But she has never seen an explanation for the amount, she said.

“We have all been through hell with this stress on all our lives,” Suarez said. She said she has borrowed from her pension and taken another loan to finish the work, and doesn’t know how she can pay back what the state wants.

Beth Torsiello, of Ventnor, said she is also waiting to find out from the RREM program how to proceed with adding a third floor to her home, which could not be lifted because of its construction. She said her first floor was lost to Sandy, and then she lost $12,000 she paid for design work to a contractor who never provided her services.

Torsiello has had her work delayed by the contractor problem and by the RREM program at first telling her she didn’t qualify.
​
“I see all these people in Puerto Rico, Texas, Florida, who think they are seeing the worst of it now,” said Torsiello. “It’s not. It’s yet to come.”