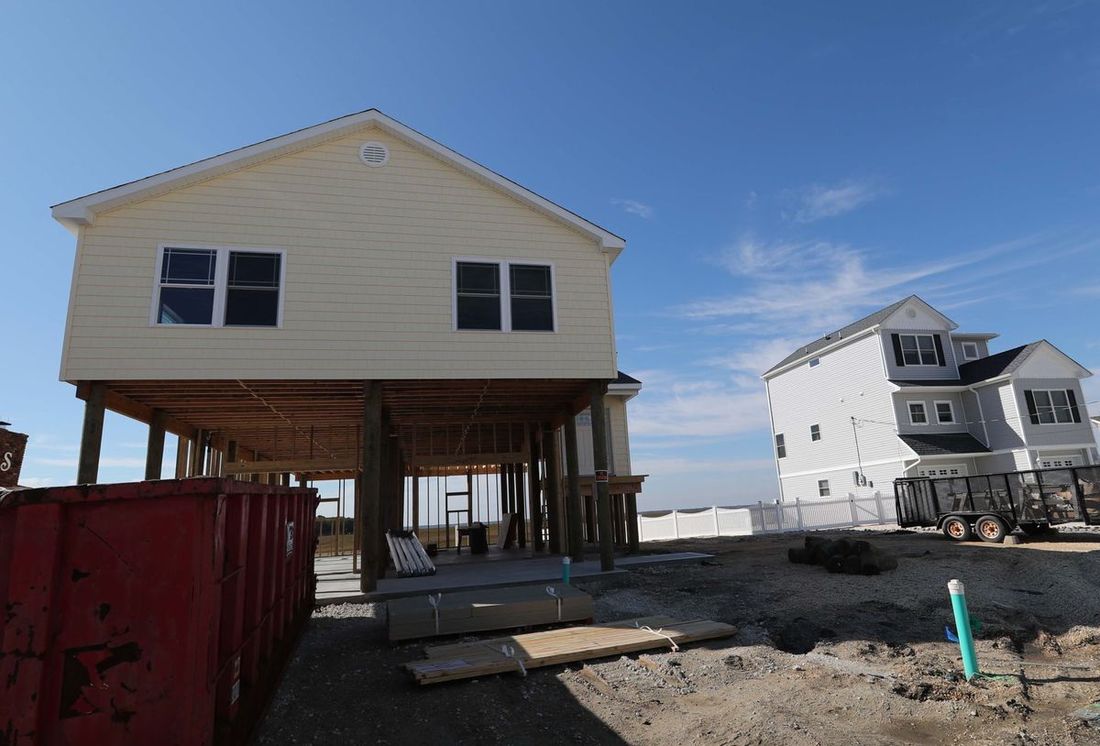 opens in a new windowHow Sandy changed us: Is it enough? by Michelle Brunetti Post

Five years after Hurricane Sandy made a direct hit on the Jersey Shore, massive amounts of money have been spent on rebuilding and resiliency projects.

Sandy changed us. But is it enough? Are we prepared for the next big storm?

There is too little Blue Acres money to buy out people in flood-prone areas, and the program has not bought out anyone in communities on the Atlantic Ocean, said Sierra Club of New Jersey Director Jeff Tittel.

Instead, the 600 properties the state has purchased for about $128 million are on the Delaware Bayshore or along rivers, where property is not as expensive as on barrier islands.

“Many people along coastal areas are being held hostage to the next storm by the DEP because they are not being bought out under the Blue Acres program,” said Tittel. “The DEP is keeping people stuck along the coast who want to leave. This wastes money and keeps people in harm’s way.”

But others are optimistic, looking to protect the shore rather than abandon it.

“It takes years — at least five years — to do any major project by the time you design and build it, if everything works out,” said Jim Rutala, of Linwood’s Rutala Associates, a consultant who has worked with every coastal town in Atlantic County and some in Cape May and Cumberland counties to plan resiliency projects and get funding for them.

Rutala says we are still working toward being ready for the next big storm, but a lot of progress has been made.

“What’s really surprising in some ways, the municipal officials in towns are still aggressive on resiliency issues,” said Rutala. “Even Atlantic City has bonded and moved projects that they hadn’t addressed in decades.”

The city got funding for a $50 million sea wall and new Boardwalk in the Inlet, sharing costs with the state and federal governments; and $12 million to put in electronically controlled floodgates in the century-old underground Baltic Avenue Canal, he said.

Rutala, the former business administrator in Ocean City, worked with the city to acquire funding for both projects.

Ventnor recently passed an ordinance requiring newly built properties to have 3 feet of freeboard, or feet above the base flood elevation. The state only requires 1 foot, Rutala said.

“(Ventnor’s) position is that 3 feet protects those homes that much more. It also helps them get (National Flood Insurance Program) discounts. The towns are focused on issues like that.”

But Amanda Devecka-Rinear of the New Jersey Organizing Project, a nonprofit started to help families recover after Sandy, said New Jersey made a decision not to think about sea-level rise in its approach to planning for the future.

“It has potentially cost us millions and millions in federal grant money we could have used to prepare for future storms,” she said. “The governor pretended building dunes was going to address sea-level rise.”
It’s a start, but nothing more, Devecka-Rinear said.

And problems with the state’s oversight of federal funds for repairing and raising homes delayed or prevented help going to thousands, she said.

About 40,000 homes were damaged by the storm badly enough that homeowners had to leave, but only about 8,000 homeowners were admitted into the Reconstruction, Rehabilitation, Elevation and Mitigation and Low-to-Moderate Income Homeowners Rebuilding programs, she said.

According to the program’s website, as of September only 5,695 have completed their projects, leaving 2,191 unfinished, Devecka-Rinear said.

Exact numbers on how many of the 40,000 are still struggling with repairs are unknown, but a survey by the nonprofit New Jersey Research Project found more than 20 percent of respondents are still not finished, she said.

Still, the work goes on.

The state Department of Environmental Protection is working with the U.S. Army Corps of Engineers on a $3 million study of flood prevention for back bay areas, from Raritan Bay to Cape May.

Stone Harbor, Wildwood and North Wildwood got a total of about $25 million in funding from the DEP’s Flood Hazard Risk Reduction and Resiliency Grant Program, which administers federal funding to minimize flooding, especially around evacuation routes.

The Stone Harbor project includes elevating streets, building a new pump station and installing flood control valves on the bayside to benefit the 96th Street bridge exit off the island.

But the Black Horse Pike into Atlantic City still needs to be addressed, said Rutala.

“It’s a state highway, and it shuts down every month,” he said, at high tide. “It’s an emergency evacuation route. It’s a constant reminder something has to be done … to elevate that route.”

He said many parties are working on potential solutions.

Wastewater treatment plants that failed in Sandy have had infrastructure hardened to be able to keep functioning in future storms, he said.

“We were moving in the same direction prior to Sandy, after Hurricanes Irene, etc.,” said Hajna. “But Sandy was definitely the impetus behind a lot of things we’ve done.”

On Tuesday, the state DEP and Department of Community Affairs announced $230 million in federal funds for construction of a flood-resistance system to protect Hoboken, parts of Weehawken and Jersey City in Hudson County.

The funds are from the U.S. Department of Housing and Urban Development and its Rebuild by Design project.

Of the $930 million awarded in the Rebuild by Design program, $380 million is coming to New Jersey. The rest is going to New York and Connecticut, according to the RBD website.

Until Sandy, the approach to beach replenishment was “a hodgepodge. Some met Army Corps of Engineers standards; many did not,” Hajna said.
​
Now, the Army Corps and DEP are wrapping up the final beach-replenishment projects on Absecon Island, which when finished will mean all beaches from Raritan Bay to Cape May will meet Army Corps standards, he said.