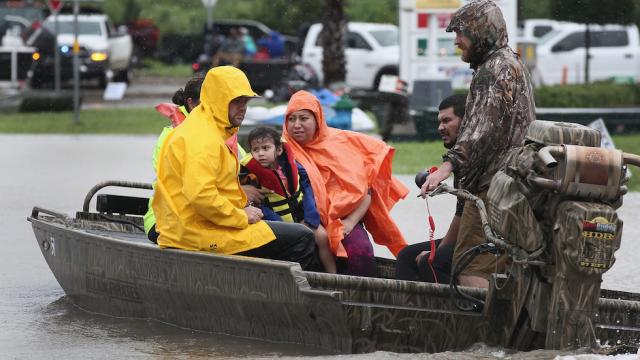 Watching Harvey descend on Houston reminded many of Superstorm Sandy in New Jersey nearly five years ago. My father is remarkable at predicting weather because he has been clamming and fishing in South Jersey for years. When a big storm or hurricane warning was issued, my father would accurately explain why it would not impact us, or would not be as bad as predicted.

When the warnings for Sandy first emerged I expected the same, instead he said, “this is the one.” And he was right, again.

In New Jersey, Sandy survivors watched Harvey unfold with the heaviest hearts. We understand flooding and devastation. We also understand “the storm after the storm” — the struggle to make recovery programs work for families. Just like my father knew Sandy was “the one”, we in New Jersey can predict what Harvey survivors will go through unless something changes soon.

​In less than thirty days the National Flood Insurance Program (NFIP) must be reauthorized by Congress. We have read and heard the program’s future debated by environmentalists, private insurance companies, and former FEMA officials. But those of us who have learned the hard lessons of Sandy have largely been absent from the debate.

We cannot afford to have this decided for us. No one should go through what we did. And, because extreme weather and flood events are becoming more and more common, families on the frontlines deserve a NFIP they can afford to be part of that works for them.

Early reports show 80 percent of families impacted by Harvey don’t have flood insurance. We’re so sorry, and we’re also sorry for those that do. Because at the moment, the NFIP works better for the private insurance companies that administer policies as part of the Write Your Own Program (WYO), than for families on the frontlines.

Many Sandy-impacted families found their NFIP flood insurance settlements lower than they thought they deserved. In an October 2014 federal lawsuit in New York, a Sandy-impacted family demonstrated that their engineering report had been altered to suggest that Sandy wasn’t responsible for the bulk of the damage.

Problems like this, pressure from policy holders, our elected officials, and years of other errors and lawsuits, prompted FEMA to agree to reopen and review any of the 144,000 flood claims from Sandy survivors who believed they weren’t fairly compensated.

As of August 2017, 19,031 policyholders who requested a review had heard back from FEMA and a total of $225,837,528 in additional payouts had been accepted by policyholders, according to FEMA.

Clearly that money should have been in the hands of storm survivors immediately after the storm, when they were crashing on couches, camping out, and figuring out how to piece together the funds to get home. While it’s important that they finally got a fair payout – we cannot let this happen to the families in Texas.

While policy costs continue to rise and homeowners were systematically underpaid, the private insurance companies that administer the WYO program were making significant profits. According to an investigation conducted by PBS Frontline’s Business of Disaster program, thesecompanies made $400 million in profit for simply administering the program.

At a time, when more and more people in America need, and should have access to flood insurance, many proposed reforms take the program in the wrong direction. Reforms must focus on affordability, addressing widespread fraud in the handling of claims, unfair exclusions and exceptions, and general underpayment from carriers.

And, the NFIP must be re-imagined in the era of frequent flooding and extreme weather to prioritize prevention and mitigation that will save our families the pain of a disaster, and save federal funds.

Disasters do not hit along party lines. These reforms are based on experience and are uniting lawmakers from both parties. New Jersey representatives in the House have introduced the same legislation.
​
We need to close loopholes and prevent abuses and are very wary of expanding the private flood insurance market. Now is the time to reform the NFIP so it works for families, prioritizes affordability and mitigation.