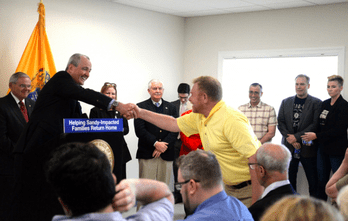 opens in a new windowN.J. expands recovery programs for displaced Sandy victims – by Justin Auciello, WHYY – April 8th, 2019
​
Millions of funds will be available for New Jersey Superstorm Sandy victims that remain out of their homes, state and federal officials announced Monday.

The plan calls for the removing the $150,000 cap on Sandy-related grant funding; expanding rental assistance to a total of 40 months for residents in the state rebuilding programs (capped at $1,300 a month); and reallocating $55 million of federal Community Development Block Grant Disaster Recovery  funds to homeowners in the Reconstruction, Rehabilitation, Elevation, and Mitigation and the Low-to-Moderate Income Homeowner Rebuilding programs.

“Since we announced these programs six months ago, we have made tremendous progress for those who have spent years waiting to return home,” Murphy said.

The governor said the marina, which was destroyed by the storm, “was rebuilt stronger and more resilient” adding that it “exemplifies what we want for every community, and every individual and every structure that was hit by Sandy.”
More than 1,000 New Jersey homeowners remain displaced.

Nancy Caira of the New Jersey Organizing Project, formed after Superstorm Sandy to fight for an equitable recovery, praised the new programs.
​
“There’s hope now, there’s finally hope,” she said. “Today is pretty remarkable — remarkable for me, my husband, and over 1,000 other New Jerseyans just like us who are still not home.”