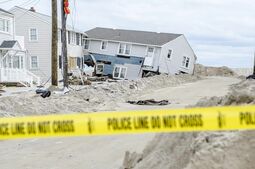 With Monday’s announcement of up to $100 million in disaster aid to be redirected to help 957 families still stuck in the construction phase of the Reconstruction, Rehabilitation, Elevation and Mitigation program came a flood of relief for those who continue to struggle 6½ years after Superstorm Sandy turned their lives upside down. RREM is the state’s largest disaster rebuilding program, but it has not done enough for everyone impacted by the superstorm.

The application process for the newly available funding will begin in June. Homeowners who accept the aid agree to live in the rebuilt homes for at least five years.

Still-displaced Sandy survivor Nancy Caira of Waretown called the funding a “lifeline” at a time when she and her husband, Tony, had almost begun to give up. The New Jersey Organizing Project member joined Gov. Phil Murphy, Sen. Bob Menendez, Rep. Frank Pallone, Sen. Vin Gopal and local officials in Neptune to announce important new opportunities.

During Monday’s news conference, Murphy expressed his hope that the added financial support will “make New Jersey whole again, after the worst natural disaster in our state’s history.”

In addition to the supplemental funding New Jersey will roll out, the state has extended rental assistance of $1,300 a month for still-displaced families for up to 40 months (previously a maximum of 21 months) and placed a freeze on “clawbacks,” whereby the state is recalling grant funds.

“We are thankful for recognition from the governor, senator and congressman for grassroots Sandy families and organizations like ours who have been pushing for these important changes, and we look forward to keeping up the fight to get families home,” said NJOP Board President Joe Mangino of Manahawkin.

Still, some remain cautiously optimistic. “We have learned when our disaster recovery programs fail, families get sicker and broker,” said NJOP’s Doug Quinn of Toms River. “We hope these new changes encourage families to keep up the fight. If the process seems off, we’d encourage families to reach out to us.”

The supplemental fund is a newly created $50 million pool available to homeowners who have yet to finish, or even start, construction because they lack sufficient resources. The U.S. Department of Housing and Urban Development gave New Jersey $4.2 billion for Sandy recovery in 2013; about $1.2 billion of it has yet to be spent.

NJOP will host community meetings to make sure homeowners are confident in moving forward in their recovery and in the application process, and will continue to take action to reduce and forgive clawbacks. Those meetings are on Saturday, April 27, 11 a.m. to 1 p.m. at the Ventnor Public Library; Saturday, May 4, 2 to 4 p.m. at Seeds of Service in Brick; and Sunday, May 19, 1 to 3 p.m. at the Elks Club in Belford.

NJOP was formed in 2014 by nine Superstorm Sandy victims and has since grown to over 4,300 members.
​
The organizing project has fought for and won rental assistance for Sandy families, transparency in Sandy spending, and foreclosure protections. Led by communities on the front lines of climate change and disaster, NJOP builds power to address the threats, health challenges and economic inequality New Jerseyans face and works for affordable healthcare – e.g., expanding access to treatment for people struggling with opioid addiction – and for reform in disaster recovery systems, to benefit families and to make communities better prepared for flooding and future storms.