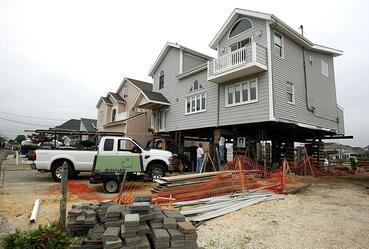 opens in a new windowNJ LOOKS TO SHIFT SANDY FUNDS, WITH NEAR 1,000 STILL NOT YET HOME by Michael Symons, New Jersey 101.5

opens in a new window​A public hearing will be held Tuesday in Toms River regarding the state’s plan to reallocate $60 million from its federal Superstorm Sandy relief funds toward homeowner and rental housing programs.

Gov. Phil Murphy’s administration is opens in a new window proposing to put $50 million into new supplemental funds to help nearly 700 homeowners whose initial grants weren’t enough – even some who got $150,000 through RREM, short for the Reconstruction, Rehabilitation, Elevation, and Mitigation Program.

“The state has made significant progress in helping Sandy-impacted families recover. Nonetheless, some homeowners find themselves at an impasse because they lack the necessary funding to complete construction,” said Lt. Governor Sheila Oliver, who is the state Department of Community Affairs commissioner. “We want to get these homeowners the additional resources they need to finish rebuilding and get back home.”

“This hearing is about the creation of the supplemental fund that’s going to help folks that are still not home six years later get across the finish line and get home and finally be able to put this behind them,” said Amanda Devecka-Rinear, executive director of the New Jersey Organizing Project.

Devecka-Rinear said some people hit major roadblocks and that supplemental funds such as those raised by churches, unions, communities and charities has dried up.

“A number of people suffered from major health issues after Superstorm Sandy. People lost jobs. People had contractor fraud. So really big challenges emerged in the recovery process,” she said.

The state would add $46 million to RREM, bringing its total to $1.35 billion, and $4 million to the Low- to Moderate-Income Homeowners Rebuilding Program, or LMI, upping it to $54.3 million.

There are still about 1,000 homeowners in the RREM and LMI programs that haven’t finished their rebuilding projects, while around 6,500 projects have been completed.

Homeowners in the programs with an unmet financial need for work not-yet-completed would be provided funds through a subordinate mortgage on which they wouldn’t have to make payments, so long as they remain in their home for five years following the completion of construction. For each year a person stays, 20 percent of the mortgage will be forgiven.

The state Department of Community Affairs says 695 applicants to RREM and LMI have a total unmet need for $44.1 million. The average cost of their projects is around $266,000, well over the maximum grant of $150,000, and more than half of them have low or moderate incomes.

The state also  opens in a new windowwants to spend $10 million more on developers of affordable housing.

At least 80 percent of the Fund for Restoration of Large Multi-Family Housing funding – which would now reach $662 million – gets spent on zero-interest and low-interest loans to housing developers in the nine counties most impacted by Sandy: Atlantic, Bergen, Cape May, Essex, Hudson, Middlesex, Monmouth, Ocean, and Union. But up to 20 percent can be spent elsewhere in the state.

The state has received $4.2 billion in federal Sandy relief funds. Changes in the spending plan are common but require federal approval.

The Department of Community Affairs says none of the changes would affect any existing funding commitment to any individual, business, community or project.

The money would come from shifting $60 million, including $23.6 million from programs that provided business loans and grants, $18 million from Blue Acres fund buyouts of homes that flood repeatedly and $11.7 million set aside to cover state and local matches for recovery projects.

The Blue Acres program is the one initiative from which money is being diverted that appears most able to continue to take on new spending. Devecka-Rinear of the New Jersey Organizing Project said money could go back into that effort later if there is demand but that it’s urgently needed by rebuilding homeowners.

“We think the Blue Acres program is an incredibly important program and a really good idea. In some ways, the way it’s rolled out has meant that not everybody who wanted to access it has had access to it,” Devecka-Rinear said.

“So I hope that by doing this, we don’t shut people out that need a buyout but that we do help people really need to close this chapter of their lives and be finished and be home,” Devecka-Rinear said. “We’re going on seven years now.”

The public hearing will be held from 4 p.m. to 6 p.m. Tuesday at the Toms River Municipal Complex.

Written comments can be submitted to the state through 5 p.m. Wednesday. They can be emailed to sandy.publiccomment@dca.nj.gov.