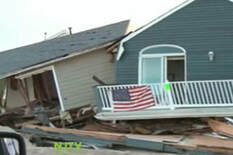 Still recovering six years after superstorm Sandy, New Jersey is looking to provide another $50 million in yet unspent federal aid to families who are still not back in damaged homes and spend $10 million to build affordable units to replace multi-family homes destroyed by the powerful storm.

The Department of Community Affairs is holding a public hearing today in Toms River on its proposal for these two measures. A hearing and public comment period are required before the state can repurpose funds received through the Community Development Block Grant Disaster Recovery program and the U.S. Department of Housing and Urban Development must approve all fund transfers.

New Jersey received about $4.2 billion in CDBG disaster-recovery funds and has spent all but $1.2 billion. The unspent funds are largely earmarked for projects and the money must be spent by 2022.

The latest fund transfers would fulfill a promise Gov. Phil Murphy made late last October on the sixth anniversary of Sandy, which damaged or destroyed 346,000 homes across the state, to help some 1,000 property owners finally complete repairs and return to their homes. Problems with contractors and insurance companies are just some of the reasons why people were unable to get back home.

Insurance company paid ‘37 cents on the dollar’
A combination of factors, including health crises, has kept the Cairas from being able to complete the reconstruction of their Waretown home.

The couple did receive a grant from the state’s primary home rebuilding program. Still, because the house was deemed “substantially damaged” and must be elevated to prevent future flooding, environmental concerns about the property mean it needs special permits. And the insurance company paid only “37 cents on the dollar” to cover costs, said Nancy Caira.

“Not only is the lack of adequate funding holding us back,” she said, “my husband and I have faced many challenges and setbacks due to our health since Sandy hit. Just six months after the storm, my husband had a serious heart attack that kept him out of work for several months in a cardiac rehab program. I also have had numerous surgeries and hospitalizations since then … Even without facing the devastation wrought by Sandy on our lives, it has been a very difficult six years.”

To help those like Caira, the state is seeking to transfer an additional $46 million into the Reconstruction, Rehabilitation, Elevation, and Mitigation Program and $4 million to the Low- to Moderate-Income Homeowners Rebuilding Program to create a supplemental fund that would provide more money for program participants who have not yet finished rebuilding to complete their projects.

Initially, a homeowner could get $150,000 for rebuilding. Approximately 6,500 homeowners in RREM and the LMI Program have completed rebuilding projects. Under the latest DCA proposal, those for whom that money, combined with insurance and other funds, was inadequate would be able to apply for enough additional assistance to cover unmet needs. Recipients of supplemental funding would have to live in their homes for at least five years, with a subordinate mortgage placed on the property. No monthly principal payments would be required and the mortgage would be forgiven after five years, following the completion of construction.

“We want to get these homeowners the additional resources they need to finish rebuilding and get back home,” said Lieutenant Governor Sheila Y. Oliver, who is also the DCA Commissioner, in a statement announcing the proposal.

Homeowners could only use the supplemental funds to complete the work for which they had initially applied when they first received a RREM or LMI grant.

“This will create an opportunity for many families where there wasn’t one,” Caira said.

The $50 million in supplemental funding would be created by transferring money from 10 other programs, according to a  opens in a new windowDCA amendment to its Sandy CDBG-DR Action Plan. The largest of these would be a transfer of nearly $19 million from a business loan program. The Stronger New Jersey Business Loans Program has already approved $83 million in loans to 120 businesses and the fund would still have about $17 million left following the transfer.

In addition, DCA is proposing to transfer $10 million for the creation of affordable housing units to address the loss of multi-family housing caused by superstorm Sandy. At least 80 percent of the money would be prioritized for projects to repair, replace or construct new multi-family housing within the nine counties most impacted by Sandy, as determined by the U.S. Department of Housing and Urban Development. Those counties are Atlantic, Bergen, Cape May, Essex, Hudson, Middlesex, Monmouth, Ocean, and Union. On completion, these projects would give priority for residency to those impacted by the storm during the first 90 days of leasing.

“Sandy also affected the rental housing market,” Oliver said. “Increased demand for rental units, coupled with the loss of rental stock due to the storm, drove up rents in all the impacted counties, pricing many people out of places to live.”

Administered by the New Jersey Housing and Mortgage Finance Agency, this program provides housing developers with zero-interest and low-interest loans to finance the development of affordable housing in the nine counties most impacted by the storm. As of December 1, 2018, 60 affordable home projects with 3,908 units have been completed with federal funds. Another 16 projects are in various stages of pre-construction and construction and will yield an additional 936 affordable units.

DCA proposes transferring $10 million from the Blue Acres Buyout Program, which has been buying up flood-prone properties. The funds transfer will not affect the state Department of Environmental Protection’s ability to continue funding buyouts, according to  opens in a new windowthe amendment that would cover this program.

The department is set to hear from the public on both amendments today from 4 p.m. to 6 p.m. at the Toms River Municipal Complex. The period to submit written comments on the $50 million transfer for homeowners ends tomorrow. People can submit comments on the affordable rental housing funds transfer through January 19. Comments also can be submitted via email to sandy.publiccomment@dca.nj.gov.