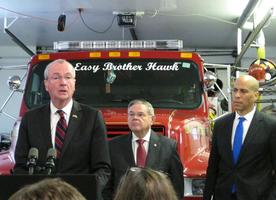 The state will provide $50 million in “cross the finish line” funds for homeowners who have received federal grants but are still struggling to recover from Hurricane Sandy, said Gov. Phil Murphy on Monday.

The announcement came on the sixth anniversary of the historic storm making landfall in New Jersey.

The nonprofit New Jersey Organizing Project, which formed to help Sandy victims with recovery efforts, has been lobbying for a “cross the finish line” fund.

The state still has about $1.2 billion in allocated but unspent federal Sandy funding, said NJOP Executive Director Amanda Devecka-Rinear. Her organization successfully argued some of it should be moved into helping people finish projects.

Murphy announced the changes to the Reconstruction, Rehabilitation, Elevation, and Mitigation (RREM) Program and the Low-to-Moderate Income (LMI) Homeowner Rebuilding Program at a news conference in Union Beach, Monmouth County.

The change requires approval from the U.S. Department of Housing and Urban Development, but that isn’t expected to be a problem as the state has made other changes to its funding priorities in the past.

“It’s six years since Superstorm Sandy,” said Toms River resident Doug Quinn, of NJOP, as he introduced Murphy at the news conference. “There are people here today who haven’t even been able to even start rebuilding because they don’t have enough funding; and others who thought they were finished, (and) even though they followed the rules and did all they were told, the state wants back tens of thousands in grant funds.”

Quinn said the organization hopes the new program will give families more hope, more opportunity and more stability.
“We’ve fought long enough and families have been through too much,” he said.

A public hearing and a public comment period on the changes will be announced soon, the Governor’s Office said.

About 1,200 homeowners in the RREM Program and the LMI Program have not completed construction, according to the Governor’s Office.

DCA is proposing a zero-interest, forgivable loan to fully fund unmet needs beyond the maximum $150,000 grant.

Participants who owe money to the program will also have an opportunity to show that repayment of the amount owed will create an extreme financial hardship.

“We want to work with people who are struggling financially to determine what they can realistically contribute, and we want to get them across the finish line so they can return home and get some much-overdue normalcy in their lives,” said Murphy.

The proposed loan would be uncapped, require no monthly payments, and would be calculated based on the remaining work needed, said the Governor’s Office.

Homeowners who accept a loan would be required to live in the home for 15 years.

If the homeowner were to sell the home sooner, a portion of the loan would be due upon sale.

And homeowners with completed projects who have been notified they must repay excess grant funds — in what have been called “clawbacks” — will now be eligible to apply to DCA for an extreme financial hardship allowance, the governor said.

DCA will use a uniform test to evaluate the homeowner’s ability to pay and may provide forgiveness of some or all the debt that remains to be paid.

Together, the RREM and LMI pro grams have rebuilt about 6,420 Sandy-damaged homes, according to the state.
​
For more information, visit  opens in a new windowrenewjerseystron ger.org.