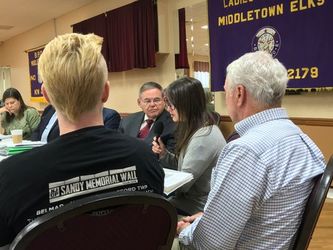 opens in a new windowBy Russ Zimmer – Asbury Park Press – Sandy: Phil Murphy promises new loans for Sandy victims, end of clawbacks Six years ago, superstorm Sandy bruised and battered the Jersey Shore and hundreds of families here are still dealing with the ramifications. On Monday, Gov. Phil Murphy marked the occasion by announcing a new loan program and a shift in policy for the families still trying to free themselves from bureaucracy’s red tape, to rebound from the shameless contractors who stole their second chance, and to move on from a natural disaster that has occupied years of their lives and plundered their savings. “There’s 56 in Union Beach alone,” Murphy said inside the garage of the Union Hose Fire Company station in Union beach, one of the hardest hit boroughs on Oct. 29, 2012. “That’s 56 families still waiting to write the end of their Sandy story.” Statewide, there are 1,200 some individuals or families still engaged in the state’s primary rebuilding initiative, the Rehabilitation, Reconstruction, Elevation and Mitigation (RREM) program.  Watch Murphy address these families in the video at the top. Hello! We’ve got complete midterm election coverage right here. Let’s begin!Some found the $150,000 maximum award insufficient because their flood insurance policies provided little relief. Others were fleeced by builders who either got in over their head or were looking to take advantage of a desperate population. All of them are stuck and unable to finish their homes, nearly 2,200 days after landfall by a historic hurricane that shattered storm tide records up and down the coast. The Murphy Administration is offering two solutions:
Scroll Up
DONATE NOW